My sister has urged me to stop taking increased doses of sleeping pills. I had to, at first, when my husband died: I was still sleeping in the bed we had shared, the bed he died in, and every night when I turned off the light and closed my eyes, I would see him in those endless nights, asking for water, or reaching with his thin fingers, so cold, for my warm hand. I would have to turn the lights back on, and sit up, and wait for the medicine to kick in. But now  just over a month has passed, and I’m feeling better, but I have been reluctant to cut back. But I did, and woke up at 1:30 a.m., and tossed and turned for the rest of the night.

Then my eyes opened finally at 6 a.m., and I dressed and went up to the roof. 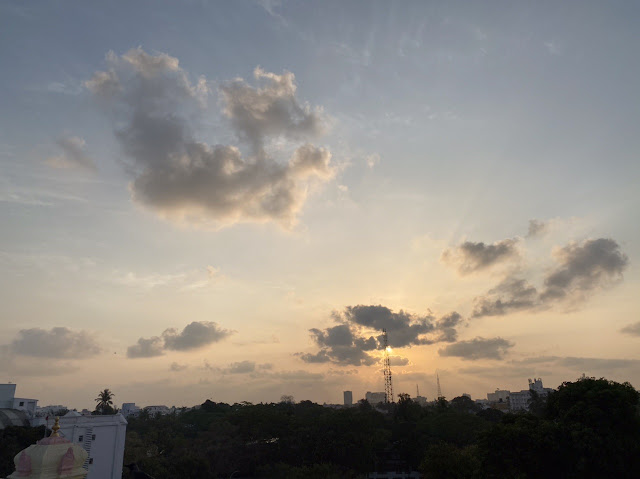 There was one man walking on a nearby roof, with his phone at his ear. Otherwise, I shared the roofs and the treetops only with two crows, playing percussion on a plastic container they were trying unsuccessfully to open. 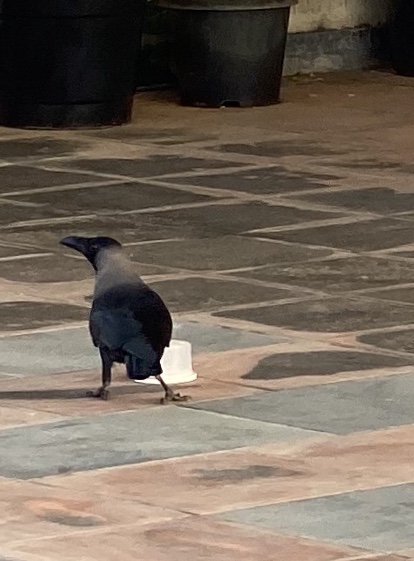 I walked to the singing of Sanjay Subrahmanyan, the Carnatic master. His voice is playful, nuanced, perfect for a quiet early morning.

I talked on the phone to Mary, my maid of more than twenty years, to get her bank details so that I could pay her salary by bank transfer. Thankfully, the government has ordained that every Indian should have a bank account. She has been taken in by relatives, so she is okay.

My part-time maid doesn’t have a bankbook because it’s in her drunken husband’s name, and he is likely to drink up money that she wants to use to educate her children.

I am washing dishes now. I have a dishwasher, but I never used it because my maid scoffed at it as being too slow and too wasteful of water. And now I can’t find the detergent for it.  Anyway, I am feeling some satisfaction as I pile clean dishes in the drying rack. Also, the skin of my hands has some texture now. And I got it while listening to Gillian Welch Radio on Spotify. Really great background music for washing dishes.

There was a TV ad when I was a kid, where a housewife laments to her manicurist, “Madge! I have dishpan hands!”  Now I do too! 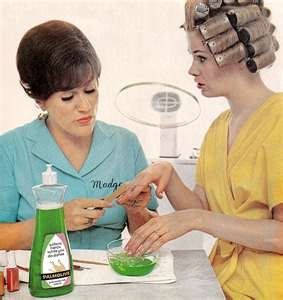