Saw Eric Rohmer’s A Tale of Springtime. He's very reliable – you will meet young, attractive, fairly prosperous people, who haven't fully settled into their lives. They meet, make friends, talk intelligently, part. Nothing much happens, yet you feel that you have been guided expertly through a story with a beginning and an end. You leave with the glow of beautiful French landscapes, rooms that have real fireplaces with tall gold-framed mirrors over them, and lots of books. My DVD library has a small shelf only for Rohmer's films, and I noticed with pleasure that there are still several that I haven't seen. Since my choices so far this year have been pretty much gloomy, horrible, or over the top (Man Bites Dog, Illuminata, Irreversible, Character), with only a few gems (Loves of a Blonde, The Tin Drum, Good-bye Lenin, Wild Strawberries), I'm longing for more of Rohmer's golden world.

Now that I have installed the extension forecastfox on my Firefox browser (why are only 22% of the people who read this blog using Firefox? Isn’t it time to leave Internet Explorer forever yet?), nice graphics of big round suns and the temperature rise up on my desktop from time to time, and then silently sink again. Yesterday the temperature was in the nineties for the first time. Yes, the dreaded veyilkkalam – the season of blinding sunlight -- is really on its way.

Since I can't get the idea of large waves quite out of my mind yet, here's another snippet from Jonathan Raban's Passage to Juneau (I’m almost finished with it, getting ready to move on to March's book: Orhan Pamuk's Snow; though I'm also dipping into John Bubsy's Drawing Birds, a lovely book recommended by someone on the Everyday Matters group, on the side):


According to Mircea Eliade, the earliest known form of decoration, the zigzag pattern rimming a Neolithic pot, represented a wave train in profile. On this coast, the undulating line of the waves, their interminable cycle of growth and collapse, ran through the art of the Indians as the essential shape of life itself. Waves chase each other around woven hats and baskets. Beautifully chiselled waves edge a goathorn ladle, a wooden feasting bowl, a maple-wood mortar. The swooping calligraphic brushstroke, as it defines the outlines of an extended composition, mimics the curve of the wave, from trough to crest and down to trough again.

Waves have always been emblems, full of sombre meaning. "I hear the waves!" cries out the six-year-old Paul Dombey in his delirium, a few moments before his death. Philip Larkin, at the seaside, meditates on "the small hushed waves' repeated fresh collapse", conjuring a multitude of small hushed lives going to their deaths. Shakespeare, in Sonnet 60, sees in the waves the futile brevity of life:


Like as the waves make to the pebbled shore,
So do our minutes hasten to their end,
Each changing place with that which goes before,
In sequent toil all forward do contend...


The wave's urgent and dramatic expenditure of energy to no significant effect makes it a natural symbol of human self-importance and mortality. ...

On Thursday we drove down the East Coast Road for the first time after the tsunami, and went to lunch at Temple Bay, a resort near Mahabalipuram. After you get out of the ugliness of urban sprawl, much of the road is flanked by the most typical scenery of this part of India: open land dotted with areca palms, cashew trees, casuarinas. If you continue south beyond Mahabalipuram, you begin to pass incredibly beautiful green paddy fields. On the ECR the ocean is visible most of the time – a long peaceful strip of blue in the near distance. Before the tsunami, from time to time you would pass a tiny cluster of thatched huts near the beach. Now we passed neat grids of tents and thatched tent-shapes, right up against the road. In one place where the village was larger, built around a clump of trees, and apparently intact, the tent-grids are still there by the road. The whole population seems to have moved back, away from the sea.

Twice we passed logs peeled and shaped for making new catamarans. Once there was a gathering of people under a cloth pandal, from which jutted out three new, brightly painted mechanised fishing boats, presumably being handed over to the fishermen.

Temple Bay itself was lush and beautiful, perfectly maintained. A conference was going on, Scientific Atlanta; people with southern American accents, presumably Atlantan, lounged by the pool. We had an excellent lunch, and didn’t want to return.

So I guess things are pretty much back to normal. But I was sorry to see those artificially tidy, fearful grids still pulled up as close to the road as possible. I hope they won’t be necessary much longer.

The pool at Temple Bay, and the ocean

What I've Been Doing 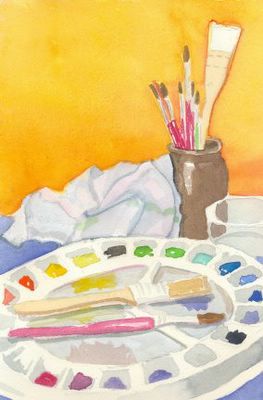 I've decided to put my efforts at making art into a separate blog, so that this one remains roughly India-themed:

The trouble is that I'm spending most of my time over there nowadays.
at 25.2.05 No comments:

I've been reading Jonathan Raban's Passage to Juneau: A Sea and Its Meanings – part of my resolve to read at least one complete book a month, instead of jumping from book to article to website. He's sailing up the Northwest coast from Seattle to Juneau, and talking about earlier visitors, Native American art, among other things, along the way. It's amazing, how he can write in so many ways about water. Here are two paragraphs which occur within a page of each other:

... Off Big Bay, great curds of yeasty scum marked the sites of rips and whirlpools that were now nearly extinct. A few logs and uprooted kelp stems continued to revolve in patches of broken water. But the surviving eddies were flaccid, and there was no real heart in their attempts to wrench the steering from my hands. The boat sauntered, at eight knots going on nine, through Gillard Passage and Dent Rapids – a scene of spent turmoil, like the tumbled sheets of an empty bed, with an appropriately salty, post-coital smell of bladderwrack drying on the rocks..

... The only motion was that of the incoming tide, stealing smoothly through the forest at one knot. Where fallen branches obstructed the current near the shore, they sprouted whiskers of turbulence that were steadily maturing into braided beards. The water was moving just fast enough to feel the abrasion of the air against it, and its surface was altering from glassy to stippled with the strengthening flood. Soon the false wind, brushing against the tide, created a trellis-like pattern of interlocked wavelets, their raised edges only a millimetre or two high; just deep enough to catch, and shape, a scoop of light.

my Bahawalpuri shoes (for the Everyday Matters group shoe challenge)

I have so little to tell these days, it has taken me a week to find a few paragraphs.

The days are still balmy, the evenings breezy, but veyil kalam, the hot season, is sending out warnings: the sharp beam of light that gets between the curtains somehow just after sunrise in the hot season has found the bottom of the bed, and is creeping up toward my eyes. Long twigs have begun to fall on the badminton court: the crows are getting ready to nest again. It’s all so inexorable.

My gardener, who lived in a slum called Thideer Nagar ('thideer' means sudden, or instant, so the name means something like Sudden Town. I assume that it refers to the way slums can come up overnight on empty ground, like a crop of mushrooms) near the Lighthouse, has been shifted along with thousands of his neighbours to a new, government-built slum clearance project in Thoraipakkam, south of the city. He hasn’t turned up for work for two days. Mary, whose son was also shifted, says that the housing is better there. Instead of palm-leaf huts, there are four-story buildings of one-room flats, with electricity and toilets attached (but no water connections indoors). But residents must pay Rs. 250 a month rent, and must take long bus rides to get to work.
at 10.2.05 No comments:

I haven't seen the new film Alexander; to me, Alexander will always look like Prithviraj Kapoor (founder of a Bollywood dynasty which still continues, in its third generation), who played him in the film Sikandar (1941) -- Sikandar being the Indian version of Alexander. The legs may not be in style today, but look at that face!

It's Spring again, at least theoretically, and time for the Basant festival in North India and Pakistan. Chapati Mystery is celebrating Basant Week: "A bit of history today. String preparation and type of kites tomorrow. Next, rules of engagement..."

(forgot where I saw it) -- on BBC's Asian Network, vote for the top 40 Hindi film soundtracks of all time -- with clips of all the songs

From The Hindu: Fading notes: an article about the making of reeds for the south Indian relative of the oboe (and the north Indian shehnai), the nadaswaram. As with most traditional crafts, the reed-makers hardly earn enough to live on. The painstaking process of preparing the reeds was fascinating to me.