The blog ban continues, even though it's increasingly clear that it was all a mistake.

My hard disk crashed, and the people who are trying to rescue its data are ominously silent. The worst loss for me will be ALL of the pictures I've taken on my not-so-new digital camera, and the scans I've been making of R's old black and white negatives, and my slides from travels here and there. At least I can re-scan the latter, though the thought of going through it all again is depressing, to say the least.

I'm listening to a CD someone gave me yesterday, A Sufi Voyage, with music by Nusrat Fateh Ali Khan, Abida Parveen, Pathaney Khan, and the Sabri Brothers. Rollicking, wonderful stuff. Almost enough to make me forget my hard disk. (Mera Ishq Vee Toon!!! I don't even need to speak Saraiki to love it. Makes my hair stand on end.)

I'm trying to write a short story, and finding it hard going. It didn't help that my first draft was on my -- did I mention this? -- hard disk.

Ghulam Farid Sabri, whom I wrote about here

update: My computer person tells me that he is able to direct my hard disk, which has to be good, right? That Sufi voyaging must have helped. So Inshallah I am hoping that by Monday all will be well. Mashallah. And I'm installing a second disk so that I can back up from one to the other. Someday I really will become a Luddite, really -- but then how will I be able to listen to beautiful music by inspired qawwals?
at 22.7.06 No comments:

I'm revisiting my baby bitter gourds. This is the vine, outside the kitchen door. The rectangle of light is the height of a brick laid flat. You can see a yellow flower, and a new baby gourd growing from the base of a second flower.
at 20.7.06 No comments:
Labels: at_home

The blog ban continues, but I’m not going to write about it – others are doing so.

Instead, I present here the latest fruits of our garden, called bitter gourd or bitter melon. They are usually cucumber-sized, but because we are lousy gardeners baby vegetables are fashionable, these are tiny. The vine on which they grew was as fine as a thread. Are they not beautiful?

According to NDTV 24X7, an Indian news channel, the clampdown on blogsites (and some websites) is NOT connected to the recent blasts in Mumbai, but is an effort to curb the propagation of religious extremism on the Net. If that's true, the ban may not be lifted any time soon.

If it's not clear from what has been said so far, the Indian ban applies to ALL blogs from these sites, not just those originating in India: ALL blogspot, typepad, geocities blogs worldwide. If you have a blog from one of these providers anywhere in the world, I cannot read you.

It's odd that we can still post to our own blogs, and read the blogs that we have had the foresight to subscribe to through RSS. These loopholes may well be closed soon, if this is to be a long-term policy.

Meanwhile, there's a workaround which allows me to read Blogspot blogs, but it's getting a lot of publicity, so it may not last long. It doesn't seem to work for Typepad. Movable Type is not affected -- no religious extremists there, apparently.

Since last night, I'm able to post to this blog, but not able to see the results after they are published, except through my RSS reader. According to Boing Boing, the Indian Government has asked Indian ISPs to block certain blog providers such as Blogspot, Typepad, and Geocities, without any explanation. I called my service provider, Hathway Internet, to confirm that that was my problem, and they hung up on me.

A couple of years ago, the government had blocked access to all Yahoo Group sites, then as in this case because of perceived security threats.

I naturally support all efforts of the government to fight terrorism, and realise that they have a difficult task right now, after the Mumbai/ Srinagar bombings on the 11th. I wonder if this is the way to address the problem.

Metroblogging Chennai is turning into a fun and often informative place to read about the city. Lately I have been most looking forward to the posts of David Appasamy (the link lists his latest posts on the site), many of which are about a Chennai which is vanishing or gone. The latest, for example, talks about Buckingham Canal when it was actually used to transport goods - something which is today hard to believe, seeing it silted up, polluted, almost destroyed.

and from my own carnet, 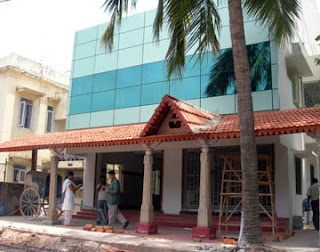 Look at this poor, architecturally-challenged creature. I am posting it not because it’s ugly — we have plenty of ugly buildings to look at out our windows as it is — but because it represents three of the city’s current architectural trends:

First, see a portion of the building on the left. This is the way most of the city’s buildings look: no architect consulted; slabs extending over the windows to act as sun / rain shades; general boxiness. Flat roofs; generally many small rooms.
If you look at the side of the building in the center, you can see that it is really the same as its neighbour.
The upper part of the facade, made of reflective glass, typifies the new buildings coming up here, of which this is a very modest version – most of them look as weird in their context as if an alien spaceship had come down in (in this case) Santhome High Road.
And finally, we come to the street-level facade, in a style which refers to Tamil traditional domestic architecture: tile roof, columns, verandah. I like this style a lot, myself, and it has come back into fashion once again, primarily for expensive houses — for people who can afford nostalgia, while concealing inside all the modern conveniences.
Any one of these three styles would have been fairly unexceptional in the Chennai of today; it is the combination which makes this a remarkable object lesson in how not to make a building.
at 10.7.06 No comments:
R and I got our names in the paper today: a nice article in The Hindu's MetroPlus section, by Geeta Padmanabhan: What symbolises Chennai? Think Chennai, and what strikes you — the city's landmarks, its tradition, culture or people?

Two other Chennai bloggers were also quoted: Thennavan and Vatsan. (The three of us also contribute to Metroblogging Chennai.)
at 4.7.06 No comments: 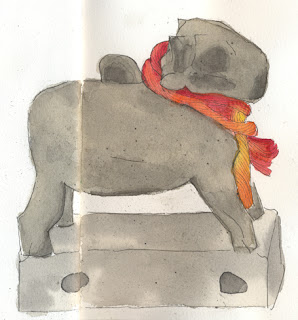 I drew and watercoloured this small bullock toy today. It has holes drilled in the platform so that wheels can be added. The thread-garland around its neck was the handle of a shopping bag from Anokhi.

My painting doesn't capture the roughness of its texture. I put a photograph of the original on Flickr.
at 3.7.06 No comments:
I love this sentence, from Tahir Shah's The Caliph's House. He's describing the morning of bakr-id, in the slum near his house:

The donkeys had fallen silent, as had the limping dogs; and the wicked boys had been hosed down and dressed in white.

I love the vanishing hand-painted signs / murals. I took this photograph today, on Chamiers Road: 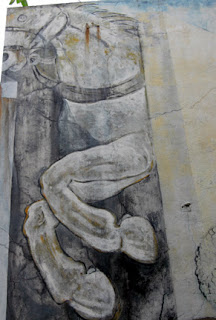 In what folds and crevices of the brain do these things reside: just now, out of nowhere, I began to sing under my breath

I'm not even a fan of Popeye, though I do like the way his muscles ripple after he has sucked in the spinach - the tattooed ship under full sail on his bicep begins to toss and pitch in the swells.