Here's something different: an MGR fan-blog. MGR, an extremely popular filmstar and then politician, died on Christmas Eve, 1987. I found this passage from the blog especially interesing:


[someone said that] when MGR fell sick in 1984, he was rushed to Brooklyn Hospital in United States. There he died, but he was fitted with machines and the control was given to MGR's wife Mrs.Janaki Ramachandran, and she controlled, the button is not mechanical one it is in a form of medicine (tablets).

One day (23.12.1987 night) MGR's wife has administered the wrong drug and the machine ceased to function and it was reported that MGR was dead. ...


As it happens, I was working at the American Consulate in Chennai when MGR died. I've posted my memories of that time on Chennai Metroblogging. Here's the text: M. G. Ramachandran, known as MGR, died on Christmas Eve, 1987. He had been an extremely popular filmstar, and then politician; he was Chief Minister of Tamil Nadu when he died. He was elderly and his health had been failing for some time, but his death caused an enormous outpouring of emotion in Tamil Nadu. I was working at the American Consulate in Chennai at that time. Early in the morning on Christmas Eve, the Consul General (CG) called me and said that he had heard that MGR had died. He said that I should try to get in to the office as soon as possible, because we were afraid that there might be some kind of unrest in the city. I was able to drive in from my house in Rutland Gate because it was still early. Later, as more people heard the news, people in cars were driven back; cyclists were forced to get down and walk, as a sign of ‘respect.’ As it happened, I had the Consulate building almost to myself. A few people had come walking, or had arrived very early; the rest stayed home. My office was on a level with the Gemini flyover – at the time the only flyover (overpass) in Chennai, and a central route to Rajaji Hall, where MGR’s body was taken to lie in state. As the day progressed, more and more people began crossing the flyover on foot, walking downtown. Soon they were a solid mass; people were coming in to Chennai from outlying towns and villages, to see MGR. I spent much of the day taking phone calls and just staring at the people streaming by. Some of them were crying, no doubt, but as the crowd grew and grew there was and air of excitement, as though they felt their own strength, and wondered what would happen next. Every once in awhile, someone would stop and throw a stone at the Consulate. One hit one of my office windows, and left a spider web of cracks in the bullet-proof glass. In the afternoon, someone jumped over the wall – which had just been raised in a security upgrade, though it had not yet become the fortress that it is today – and smashed the glass on each side of the Consulate’s main door. Then he ran back and over the wall and was gone. There was some looting of shops – I could see from my window a petrol bunk being broken into, and people making off with cans of engine oil and such; some cars, I heard later, were damaged; there was violence throughout the state, and many people committed suicide; but what I saw was just the huge, unimaginable mass of people, all headed in one direction. On the day of MGR’s funeral, I drove out with a black dupatta tied to my windshield wiper as a sign of mourning, and picked up a large floral wreath. I was nervous about it, but no one stopped me. I went to the CG’s house, where a police escort was supposed to take us to Rajaji Hall. No one turned up, however, so we decided to go alone. We put the wreath prominently in the front seat beside the driver, and set off on our own down the beach road. The road was completely jammed. The size of the crowd was unimaginable – hundreds of thousands of people. The driver had to inch along. People peered in, saw us foreigners and the wreath, and parted to let us pass. None of us spoke a word – it was like driving through a tunnel made of living human beings, of whose intentions we were unsure. Eventually we reached the place, later than we had intended, because of the non-existent police escort. By this time MGR’s body had already been removed and placed on a gun-carriage (I think that’s what it was), where he would be taken in procession through the streets, before being buried in a hastily constructed tomb on the beach. We carried the wreath to the carriage, handed it up to someone who placed it on MGR’s body, and stepped back. Then we drove back through those thousands of people; I went home and watched the rest of it on television. If you have seen Mani Ratnam’s film Iruvar, which tells a story based in part on MGR’s life, there is a scene at the end, where the main character’s body is taken on a carriage through huge crowds. That scene looked very real: it brought the day back to me. It was an unforgettable experience.
at 24.12.06 No comments:
Labels: Chennai

We flew from Chennai to Coimbatore. Most of Tamil Nadu is red and flat; then giant rocks or very small mountains rise suddenly from the plains. This view from the plane window, of rocky hills above thin cloud looked like the mountains of heaven: 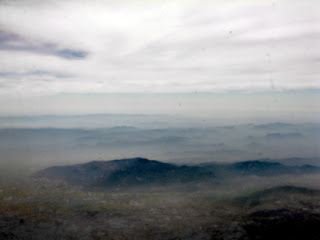 The main road to Coonoor was closed for more than a month: landslides because of heavy rains. It had just re-opened the day before we drove up, but no heavy vehicles were allowed, since roadwork was still going on. The road was almost empty. In many places, raw red earth slides looked as if it would take very little to set them moving again.

A picture from the hotel:

More of my photos of Coonoor on Flickr. (and still more to come)
at 19.12.06 No comments:
Labels: Coonoor
burnblue.com sketchbook:

From November 15, 2004 to June 8, 2005 I travelled through many countries, read 34 books, got sick 3 times, got robbed 2 times, and learned more about myself and this world than i thought possible. This sketchbook records those 7 months in images.

Sketches of Thailand, India, Africa, Europe. Most of it could be anywhere, but I kind of like the idea of a travel sketchbook that doesn't have anything picturesque about it. Once in a while.
at 13.12.06 No comments:
Newer Posts Older Posts Home
Subscribe to: Posts (Atom)