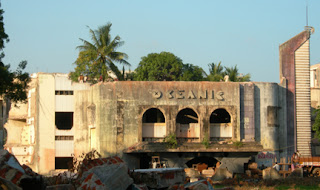 Hotel Oceanic, on Santhome High Road. I've never been closer than this - it stopped being a hotel long ago, though I've been told that it was quite glamorous in its day. Lately it has been used as a location for film-shootings. Recently someone wanted to renovate it and make it into a boutique hotel, but that didn't work out. Now it has fallen to the building boom which is transforming the city. 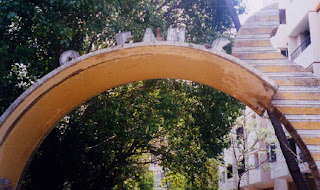 Part of the arch leading into the hotel grounds, which have been blocked with a chain and padlock ever since I've seen the place. I never had the nerve to jump over the chain and take a look inside.

I had a fantasy, which I named A Weekend at the Oceanic: people in elegant clothes, and this crumbling building in the background. Nadira in a glittering long gown singing 'Mudmudke na dekh' ('Don't look back').

(My [not a masterpiece] painting of the Oceanic, based on these photographs, is here.)

What to Buy Now

From Spice, an offshoot of India Today:

The Sajjadah 1426 ... is for the devout who pray five times a day facing Mecca. With electro-luminescent printing technology ..., the direction of Mecca is indicated via a compass module embedded in the rug. The closer the mat is turned towards the direction of Mecca, the brighter is the illumination on the rug. In case you are confused, the year 2006 is 1526 as per the Islamic calendar, and sajjadah means bowing in prayer.

In November my sister came to visit for the first time. She appeared to enjoy everything. She said, "It's so exciting -- my first monsoon!" I said, "But you get more rain in Boston than we do." She said, "Yes, but it's not called a monsoon."

I could have said that it was my first monsoon too, in the sense that during this monsoon season we have had, and are having, more rain than anyone has seen or recalled. Fifteen months worth of drinking water released from the reservoirs, because they threatened to overflow!

A couple of years ago I entered NaNoWriMo - National Novel Writing Month. My novel was called Waiting for the Monsoon. The main character's life, internally and externally, was full of dryness and thirst. In the climax, a cyclone hit. The character had to rescue someone whose house was threatened by floods (all imaginary, before the tsunami and the current rains); finally the main characters gathered together, safe inside while the storm raged, internal thirst and the land's both quenched. (I never finished it; lost faith in it.)

Instead of a climactic cyclone, we're having storm after storm, and they all have names, suddenly, so that they seem to be bringing their wind and water with malice - Pyarr and Baaz and Fanoos; and, currently, Mala.

We are okay, except for continuous electricity breakdowns and a tree in the garden fallen because of sodden earth; but people in low-lying areas are in a bad way. And twice in the last several weeks there have been stampedes at relief centres, where more people died - 42 or so yesterday - than have died because of the storms.

Yesterday Mary told me that someone had told her that a statue of some god somewhere, in some temple, had suddenly opened one eye, and that's why this whole year has been full of disaster. It's an interesting concept: people are always calling on god for something or the other, but when he/she wakes up and pays attention, things become very, very dangerous.
at 19.12.05 No comments:

"Enjoy the experience safely and comfortably in our special thermal clothing. See! Feel! Enjoy!"
at 5.12.05 No comments:

My maid Lakshmi slipped and fell about three weeks ago, and got a small gash on her forehead. We treated it with antiseptic and so on, and it was okay except for a slight swelling. But she is deathly afraid of anything connected with her head: her two brothers died of paralytic strokes which were apparently related to drinking illicit liquour, but she believes that her family has a tendency for weakness in the brain. So she went for additional treatment to a neighbour in the slum where she lives: the woman poured boiling water from the rice pot onto the swelling. Now her attractive face is disfigured with a blackened mark where the skin burnt. She's not at all stupid, but she has little formal education. Is that why she did such a thing? The slum is a hotbed of rumour, gossip, opinions, superstition - can one live in it and think independently? Her pretty daughter is still a student - does she see the world the same way her mother does? Can she escape?

By the time Baaz reached us it had weakened and become less the hawk which is the meaning of its name, and more like a big bucket of water. I've been fretting for years over water scarcity, and this year, lakes and rivers are brimming and breaching. We've had 154% of the normal rainfall this monsoon season, and it's not over yet.
at 3.12.05 No comments:

This week a man in Gummidipundi filed a case in the High Court, claiming that the Tamil Nadu Cricket Board should not be allowed to schedule matches in November-December (the monsoon season). According to him, the Board knowingly schedules matches that will be rained out, so that it can defraud the public of crores of rupees, because it doesn't refund the ticket money if the match cannot be played. The case was dismissed.

There's a puyal, a cyclone, squatting in the Bay of Bengal, poised for days to cross our coast. A five-day cricket test match has been moving backwards in time, hour by hour, and has reached us now, today, and everyone knows that it will be spoiled by the puyal, which carries the name Tropical Cyclone Baaz.

As far as I know, our cyclones didn't have names before; but with all the glamorous-sounding female hurricanes in the news this year, we suddenly have Pyarr, which struck a couple of weeks ago, and now Baaz. I'm tired of Baaz. Every morning for days I have come downstairs in the morning and asked Mary - because she listens to local news on her radio - "Where's that puyal? What's that puyal up to?"

The start of play has been delayed by showers in the night and early morning. Now they say that Baaz will cross the coast tonight, but who knows? When it does come, it will arrive in a complex package, bringing us precious water; flooding our houses and fields; killing some of us; and, in many ways, spoiling our puny fun.
at 2.12.05 No comments:
Newer Posts Older Posts Home
Subscribe to: Posts (Atom)