A Small Shrine in Mahabalipuram 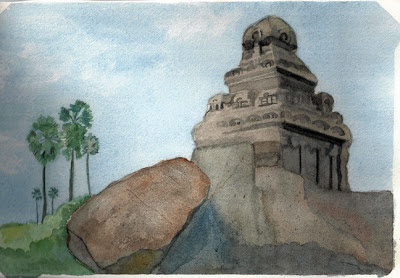 I started out with a photograph I had taken in November. I confess that I moved the palm trees, which were nearby, into the picture to complete the composition. Like most of the Mahabalipuram shrines, this one was unfinished; it appears to grow organically from the single chunk of rock out of which it was carved.
at 31.1.06 No comments:
Labels: Mahabalipuram

We went to a surgical supply store, because R wanted to look at digital blood pressure readers. They had several models, all made in China; but I was attracted to the anatomy models. 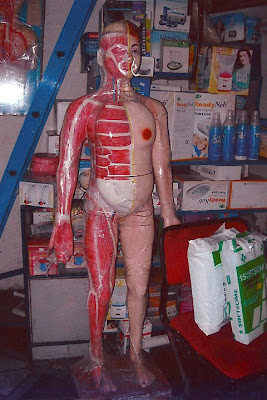 The store was very small and narrow. Three men, including R, sat on stools on one side of the counter, with the proprietor, a round-faced Punjabi, standing behind it. They were all talking and R was joking with them, as though it were a bar and the owner the bartender. 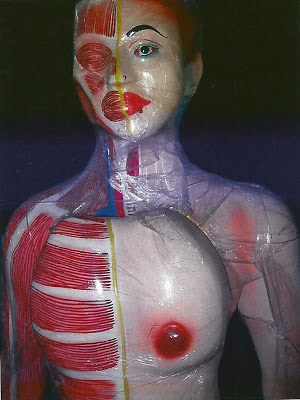 I wanted to buy this one, to keep in the house as a sculpture. I asked one of the two girls who stood around without obvious functions, except to follow the owner's orders, what it cost. She turned to the owner and said, "Sir?" He said, not unpleasantly, "Why are you always telling me 'Sir, Sir,' you don't know anything for yourself?" Meanwhile, R had shot me a look which said very plainly, "Don't even think about it" - and I had a feeling that he might be right - so I didn't pursue it. 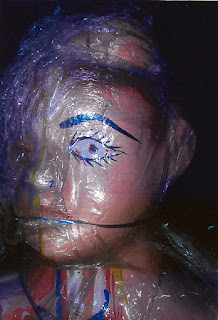 I also liked the head with acupuncture sites marked in Chinese, and the giant gums and teeth. There were plenty of Chinese goods in the store. In fact, it seemed to have just about everything, stowed away in nooks and crannies. The proprietor was not able to give his full attention to anyone, because his cell phone rang continuously. The two men sitting beside R began to look impatient; R said they were buyers for a nursing home, with a big order, and would be expecting a commission for themselves. 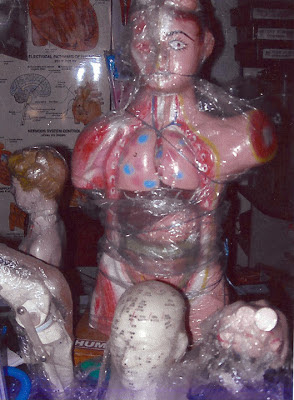 As we were leaving I thanked the owner for not minding my taking photographs. He waved his hand and said, "No problem." R told him, "She's going to put these pictures on her website." He said, "Fine, and you might just mention the name of my company at the same time." So here it is: Madan Surgical Corp. on Mount Road, next to Pioneer Sports.
at 20.1.06 No comments:
Labels: Chennai

The Everyday Matters drawing group, to which I belong, had a challenge this week, to draw what you see when you walk in your door. I've put it up on my sketchblog, if anyone's curious: Outside Inside
at 18.1.06 No comments: 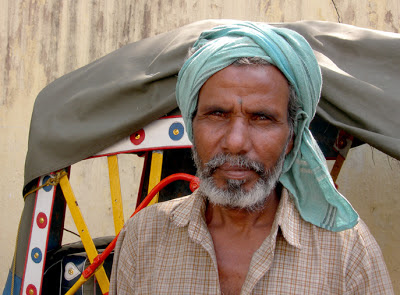 (I had originally titled this post 'Rickshaw Kaaran' - but renamed it, using the more respectful 'Kaarar', after reading the comments below.)
at 14.1.06 No comments:
Labels: Chennai

Last night we saw a trashy Hindi film, Hawas (Lust) (one of two Hindi remakes of the American film Unfaithful - the other being Murder - which was in turn a remake of Claude Chabrol's La Femme infidèle. I've seen all four of them now; much more than enough).

My favourite line of dialogue came at the beginning, when two policemen with peculiar singsong accents, ostensibly because the movie was set in Dubai, are questioning a murder suspect. They insist that she take them to her home.

Policeman: We wanted to question you in your own home, so that if you needed support you could have the walls.

It was as enigmatic to me as a Zen koan.

Hopefully the cyclone season is over, but here's a place to keep an eye on the next one: Tropical Storm Risk. This page is for the Indian Ocean, but it has links to other parts of the world as well.
at 7.1.06 No comments:

We went to Cafe Mocha, a new and fashionable place on newly fashionable Khader Nawaz Khan Road. It's a franchise of a popular cafe in Mumbai. Most of the tables are outside, in a cool and breezy area (not sure how it will be when the hot season strikes), floored with sand and strewn with an amazing miscellany of furniture. There is a long table with a water channel running down the middle and a Buddha's head at one end; there is a big wrought iron bed with a gaddi (thin mattress) with a small table placed on it -- the kind from which one might eat breakfast in bed. There are planter's chairs and sling chairs, rough granite slabs and barrels. There is Middle-Eastern music in the background, and hookahs to order, their peach-flavoured smoke filling the air. 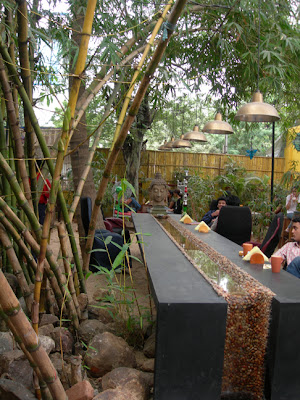 It was bustling, even at 2:00 in the afternoon. Virtually everyone but us appeared to be under thirty, and there were many more women than men. Almost everyone wore jeans. I wondered if these were the call centre workers who are so much in the news these days, with some money to burn and plenty of time to sit around in the middle of the day.

I had a cafe zabaglione, which, according to the (large) menu, actually contained marsala; which is strange, because as far as I know, alocohol cannot be served in a restaurant in Tamil Nadu unless it is attached to a hotel with a certain amount of beds. There was probably no more than a teaspoon of it for flavour; maybe that doesn't count. Anyway, it was good, and so was the panino with cream cheese and japlapenos, served with a small dish of pesto.

R wasn't crazy about the sand-covered ground or the ragbag furniture; and I was trapped in a sling chair, with my posterior about one inch above the ground, and my knees unnervingly close to my chin. But I wanted to enjoy it, and I did. And the people around me seemed to be feeling the same way. All of this -- food, drink and ambience -- would have been unimaginably exotic a few years ago. Now, if not routine, at least it's available at several places around town. Chennai's changing. 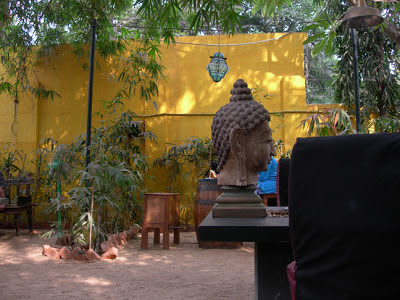 Welcome, dear reader. This is my new web experiment. The experiment ends with the month of January, at which time I'll be going back into the woodwork where I came from.

But while it is around, I hope this blog proves to be a place for good stories, both in the main columns and in the comments boxes. Mostly, you can expect words and images related to a journey I made to Nigeria in December 2005, though from time to time I may stray from that brief. Blogging is public, but there's also an intensely private aspect to what I'm doing here, namely, working on my writing and photography. There can be a meaningful intersection between that private work and this public sphere. That's what I hope for in this brief sojourn in Blogistan. Thank you for reading and looking.

Both Feet on the Ground

Self-portrait on the first day of the new year 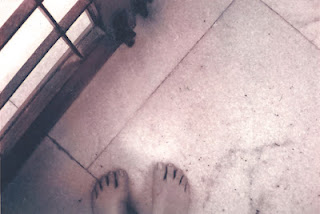