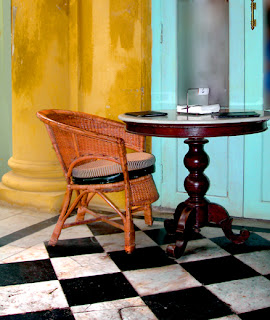 It's the best kind of weather: rain, not heavy and therefore destructive, but fairly steady and saturating, so that the garden looks impossibly, radiantly green. The temperature is almost 20 degrees less than it was a couple of weeks ago -- in the upper 80s.

We went to Amethyst and sat on the verandah, watching drops of water dropping from leaves and drinking cappuccino. It was heavenly.
at 21.6.07 3 comments:
Labels: at_home

I read this and immediately thought, Yes, that's me all right...

Some good photographs of Chennai.

I love mehndi. Here's a photoset of Indian mehndi on Flickr. And one of Arabic mehndi. (both of these links via Dispatch from L.A.)

A pleasant side-effect of the real estate boom: yesterday afternoon one of the city's few organised real estate brokerage firms sent us a bushel basket full of perfectly ripe banganapalli mangoes. How many such baskets must they have delivered all over the city?

I've eaten more mangoes this year than ever before, and the season is not over. Last night Mary surprised me with a sweet-sour curry of green mangoes from our garden, after I had eaten one of the meltingly sweet real estate-mangoes for tea...

It is equally sweet-sour to remember that mango season will be over soon; though if it weren't I would be in danger of ending up like the young English lady in India whose epitaph I'm sure I read about somewhere, who died of a surfeit of pineapple.
at 7.6.07 9 comments:
Labels: at_home

In India, when you are talking about bed linen you don't say 'sheets' but 'bedsheets.' I suppose it's to save you from the embarrassment of asking a shopkeeper for sheets and being presented with pieces of paper, or sails.

I struggle with insomnia. Tossing twisting, contorting into the aches I will feel tomorrow, I forget what I am trying to do: SLEEP, dammit.

It's dry, dry, not finding sleep. The twisted sheets have sandpaper edges. The air-conditioner gurgles like a creature with indigestion. I will fold one sheet into a captain's hat, another into a boat, raise the sail and I'm away.
at 6.6.07 5 comments:
Labels: at_home

I don't look at my search engine referrers very often - they tend to be pretty repetitive (e.g., from a few minutes ago: 'late in night we clothless photo') - but yesterday I did, and I found two interesting ones:

--'at what does watermelon laugh when it's murdered.' That was intriguing enough that I did the search myself, and found this page. I'm not sure exactly what it is, but I gathered that it was a line from a poem by Pablo Neruda, and, searching further, found this.

--'I chopped down the house that you had been saving to live in next summer'. That turned out to be from 'Variations on a Theme by William Carlos Williams' by Kenneth Koch. Here it is, from this site:

Variations on a Theme by William Carlos Williams

1
I chopped down the house that you had been saving to live in next summer.
I am sorry, but it was morning, and I had nothing to do
and its wooden beams were so inviting.

2
We laughed at the hollyhocks together
and then I sprayed them with lye.
Forgive me. I simply do not know what I am doing.

3
I gave away the money that you had been saving to live on for the
next ten years.
The man who asked for it was shabby
and the firm March wind on the porch was so juicy and cold.

4
Last evening we went dancing and I broke your leg.
Forgive me. I was clumsy and
I wanted you here in the wards, where I am the doctor!

Six large mangoes were stripped from our tree overnight!! And I have a prime suspect, too... but I only used that post-title because it sounded so good: what I really want to talk about is saffron.

When I became a poor imitation of a Gujarati housewife, one of my first tasks was to phone in the monthly provisions order, something which my mother-in-law had been doing before my arrival. The provision store owners were also Gujaratis, so they had all the special things we need, like kokum, methi kuria and so on. Once a month their van would pull up, and the kitchen floor would be heaped with bags of rice, dals, oil, sugar, spices and so on. It was a big event. Now we have stores which somewhat resemble American supermarkets, and I prefer to go and buy the stuff myself; but they did not exist at that time.

So I carefully made a list and phoned the store. They always recognised my voice, and put me on to the best English speaker among them. I began working my way down the list. We ordered most spices in 100 gm. packets – cumin, anise and black mustard seeds, turmeric powder, asafoetida, etc. On that particular day, I also had saffron on my list. We didn’t use it very often, but it had run out. So, along with everything else I said, “Saffron, 100 gm.” There was a silence on the other end of the line, and the man who was taking my order said, “Sister, do you know what 100 gm. of saffron costs?” I didn’t, and he named an astronomical sum. It was my turn to be silent, then I said very meekly, “So, how much do you think I should order?” He said, “One gram should be fine,” and I quickly agreed.

I remembered this in the grocery store yesterday, because another foreigner was similarly taken by surprise – she was confronted with 4 or 5 grams for Rs. 315 (about US$7). I’ve been grinning ever since.

(update: I've gotten some good comments on this post:
Ravi said, "I encountered a similar case in a grocery store in Chennai many years back; but the ingredient then was cardamom. I think the customer lady ordered for about 100 gms and the guy in the grocery store immediately quipped 'Are you having a wedding at home?'"

Kumar said, "... I was sent by mother to get 1Kg milagai (red chillies) for avakai from our mango trees. I shortened it to "milagu" (pepper), ... I was laughed off and asked to check with my mother again."

Subramanian said, "Immediately on introduction of metric sytems ... I had been to a nearby grocery and I ordered 5 grams of Butter without any idea how much it would be. Then the grocery man ... said he is not even having such an accurate balance to weigh 5 grams ..."

It seems that looking silly at the grocery store is a common experience.)
at 1.6.07 13 comments:
Labels: at_home
Newer Posts Older Posts Home
Subscribe to: Posts (Atom)