August 22 is Madras Day, the (368th) 'birthday' of the city of Chennai, which was called Madras for almost all of its previous birthdays. Kutcheribuzz has a Madras Day website, and Chennai Metroblogging has a number of posts connected to the city and the day.

Going through newspapers that had piled up in our absence, I found an extremely interesting article about professional mourners in the Tamil fishing community. Their art, of wailing and singing songs for men who have died, is called oppari. I Googled oppari, and found this article: Professional Weeping: Music, Affect, and Hierarchy in a South Indian Folk Performance Art.

This looks very cool (via Lifehacker): a free yoga class delivered each day by podcast, from Yoga Today. Unfortunately, you have to have really broad broadband, and unlimited downloads, to benefit from it: I've been trying to download one hour-long program for hours, and it's coming very slowly. The site suggests that if you choose the higher-res download (1 GB), you leave your computer on all night, so that it will be ready for you in the morning.
at 22.8.06 No comments:

So we're vacationing in Bangalore, and we're in the bar, and sitting at another table is Feroze Khan, who was a filmstar once, and who is a producer, and whose son is acting in films. He was drinking with someone who seemed to be a pal of his. A little blonde girl, the child of one of the foreigners who are staying at the hotel, and who looked to me to be about nine years old, all dressed up in churidar-kameez, with a dupatta and everything, and probably feeling very grown up, went over to his table. My first thought was, Where are her parents? Then I looked again, nosy/curious, and saw that she had draped a loop of string around the pal’s hands, and was showing him how to play cat's cradle. She was very intent on the loops and twists, and when she was done both men applauded. I looked again a few minutes later, and she was sitting in the chair next to FK's, and he was showing her what looked like sleight of hand, a magic trick. He looks dramatic, a shaved head covered with a long scarf. He was doing magician-like hand movements with flourishes, and she was trying to copy him, and the light was shining down on both of them, and it looked charming. Then it was over, and she ran back to a stool at the bar, where her father or someone was waiting for her.
at 20.8.06 No comments:
Labels: Bangalore

August 15 is Indian Independence Day. Last night someone from Guest Relations called us and said that the hotel was having a flag-raising at 8:00 this morning, and invited us to attend. To my surprise, R agreed – he avoids ceremonies of any kind, and we never get up before 8:30. But we duly walked up to the hotel gate at five minutes to eight. A group of employees was arrayed around the flagpole; the security guards in their uniforms were trying to look military. Coffee and Indian sweets were kept ready at tables to one side. One of the staff came up to us holding a tray covered with pins in the colours of the Indian flag: saffron white green. R picked out a flag pin, I chose a small rosette shape. Then we waited. A few hotel guests trickled in, but most were staff. 8:00 came and went and R, always obsessed with time, began to be impatient. Finally, at 8:10, a car drove in the gate: the Manager had arrived. He drove a little beyond where we stood, got out and hurried back to the flagpole. As he passed us, R showed him his watch and said, “Independence came late to India.” (He told us afterwards that he had attended the Chief Minister’s flag-raising, which had been late.)

The flag was already at the top of the flagpole, folded into a small bundle. The Manager pulled the rope and unfurled the flag, from which flower petals showered onto the watchers below. Everyone applauded, and a tinny recording of the national anthem was played. The Manager shook hands with the assembled staff members, and we went to breakfast.

In the afternoon we will fly back home. When we scheduled our return for Independence Day we didn’t think twice about it; now, with the new state of high alertness, and an additional warning for today, we are dreading the prospect of delays at the airport. All passengers must now arrive at the airport 90 minutes before the flight time (for, in our case, a 20 minute flight). We don’t know whether we can carry on the laptop, my camera, R’s camera bag crammed with lenses – none of which we would like to pack into our suitcases.

It will all happen, one way or another. This day will slide into the past, and tomorrow morning I will wake up in hot Chennai, and walk downstairs to start the day, as if this place, with its concerns and ceremonies, never existed.
at 15.8.06 No comments:

Still on vacation, and still updating my arts blog with sketches and findings and such: fire star arts 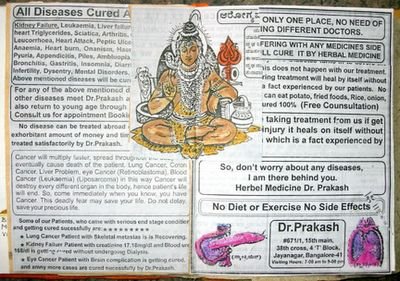 It's always interesting to see what Sepia Gallery, in New York, is showing. Their current online exhibition has eight photomontages by Vivan Sundaram, called 'Retake of Amrita.' According to the description:

...'Retake of Amrita' ... fuses photography, painting, family history, and autobiography into multi-faceted contemporary fictions. This series of digital photomontages utilizes images from his family archive, including photographs taken by his grandfather Umrao Singh Sher-Gil...; the primary protagonist of the series is his aunt, the painter Amrita Sher-Gil (1913-1941).

Take a look at the section on past exhibitions as well.
at 4.8.06 No comments:
Labels: photographs_others'

I'm on vacation, first of all. Hurray for wi-fi!

Secondly, a few days back I was able once again to see the blogsites which had been banned by the government earlier - blogspot, typepad, geocities. Many ISPs had lifted the ban earlier; mine, Hathway, was apparently one of the last to let go. No notice of imposition, and none of lifting: one day it was all just there again.

Thirdly, I am amusing myself with a little pamphlet I made out of old wedding invitations: 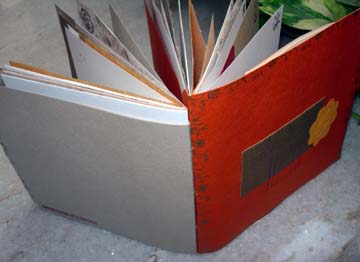 I'm filling it up and posting the pictures on my sketch blog, for those who are interested in this kind of thing: fire star arts.

That's about it, I guess. It's so lovely in Bangalore right now - soft air, a breeze making the most beautiful sighing sound in the branches of the trees, birds with more melodious cries than those of my household crows. As in the beginning of every vacation, it's hard to imagine ever leaving.
at 2.8.06 No comments:
Newer Posts Older Posts Home
Subscribe to: Posts (Atom)