Wondering what to post, I fell back on the amazing Wit and Humour in the Tamil Nadu Legislative Council 1921-1971, Volume I.

It is best to let such books fall open at random, so I did -- and found this:

Humorous Definition of 'Tiller of the Soil'

On the 24th of September 1956, during the Debate in the Council on the Madras Cultivating Tenants Protection (Amendment) Bill, 1956, a humorous situation erupted when the Minister (The Hon. Thiru M. A. Manickavelu) tried to give a "layman's definition" as he himself put it, to the term 'tiller of the soil' by saying: "As I understand, a tiller of the soil is a person who, with a very scanty dress -- he has no coat, no turban and no umbrella in hand -- takes a plough and ploughs the land. There is sweat on his brow."

The following exchanges then took place:

"Sri A. M. Allapichai: Is it a crime to wear coat?

The Hon. Sri M. A. Manickavelu: No, not at all, even a long coat can be worn (referring to the Member's long coat). (Laughter) So, the tiller of the soil is the opposite of one who wears a coat and turban holding a walking stick or umbrella in hand and goes round his field, comes back home, takes coffee and chews pansupari.

Sri. A. M. Allapichai: Suppose he applied his mind? Application of mind also is physical labour.

The Hon. Sri M. A. Manickavelu: Yes, Sir. He must very much apply his mind because if he wants to take away the weeds, he should not pull out the crops in the process. Mind also plays its part."

In India, power failure is called load shedding. At the moment, we're having 1 1/2 hours of it every day; the Chennai suburbs three hours a day; the rest of the state five hours a day, for an indefinite period.

Today I saw in the paper a new (to me) word for it: 'power holiday.'

The government's explanation is interesting. According to The Hindu:

The revised system of intensive load shedding... has been designed to ensure that there are no unscheduled disruptions in power supply.

... the main cause for the frequent interruptions in the supply is the under-frequency relay factor...inadequate capacity addition... poor rainfall ... substantial reduction in the State’s share of power from Central Generating Stations that are hit by the shortage of lignite and uranium... [and] ... sudden loss of wind energy...

Opposition leader, Jayalalitha's response to this was succinct: she was quoted as saying that the reasons cited by the government for power shortage are "strange and ridiculous."
at 2.9.08 7 comments:

Boy, this is disgusting, from the New York Times: Vogue’s Fashion Photos Spark Debate in India 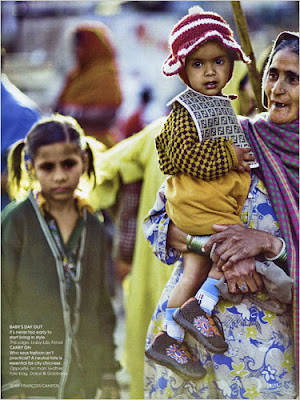 That bib is likely priced at about two months' wages for this lady. This looks like cruelty to me -- let them eat cake.
at 1.9.08 7 comments:
Newer Posts Older Posts Home
Subscribe to: Posts (Atom)