I read this passage from an Iranian weblog (via Cassandra):

There was this celebration thing in North Korea, people gathering and all of a sudden everybody was pointing at the clouds. Yeah, a portrait of their great leader "Kim Il Jing Jung Bil something" could be seen in the clouds.
That really meant something to them. And of course to me.
30 years ago when Khomeini was supposed to come to Iran and take over the regime, people were excited with similar stuff.
It was rumored one night that Khomeini's face could be seen in the moon. Another day, you would find a lock of his beard when you opened your Quran, and so on... (more)

The billowing clouds, the moon, the lock of Khomeini's beard, all joined together to create an image that has stuck in my mind ever since.

We have our own wonders, of course. A couple of years ago there were statues of Lord Krishna which were said to drink milk.

Then there was the new Jain temple here in Chennai, whose walls began to exude nectar.

And one of my favourites, reported in India Today magazine (December 2002): the chappati with Jesus’ face on it: 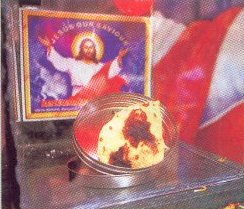 Jesus and his Bread of Life

…Now, some Catholics in India may journey to Bangalore… for they believe that Christ’s image has miraculously appeared on… a chapati… Sheela Anthony, a devout Catholic, was making chapatis for dinner. One was partially burnt and the browned area bore a likeness to Christ’s face. She took it to the local priest… who declared it a miracle.