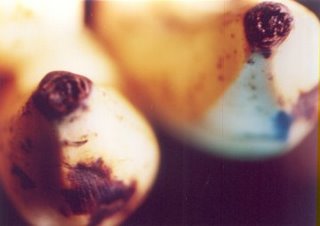 After I posted this, I remembered a song we used to sing at the Robert E. Lee Elementary School in Alexandria, Virginia. Does the song still exist? Does the school still exist?:

And here’s a joke, from Tim Mackintosh-Smith’s Yemen:

Once there was a blind girl. She was twenty-five years old and longing for a husband; but whenever she brought the subject up with her father he would say, "My daughter, you are blind. No one wants you. But don't worry -- you'll find a husband in Paradise." Well, one day she was up on the roof hanging out the washing when she tripped and fell, down and down, six storeys. By chance she fell into a lorry carrying bananas and was knocked unconscious. The lorry drove on. Ten minutes later she came to. Ah, she thought, I am dead. Then, as she felt the bananas, she remembered what her father had told her and gave a little shriek: "Slowly, slowly, men of Paradise! Please, take your turn!"

(Yemen, and especially Mackintosh-Smith’s more recent Travels with a Tangerine: A Journey in the Footnotes of Ibn Battutah, are beautifully written and sensitive accounts of travel in the Arab world.)
at 27.4.03
Newer Post Older Post Home