The Call of the Koel

The wind perfumes the woods with fragrant powders of pollen shaken loose from the slightly opened flowers of the jasmine creepers; here, the wind, which is like the breath of the god of love advancing… inflames the mind.

In Indian poetry, the koel is associated with lovers. But koels’ lives are more practical than romantic: They are related to cuckoos. They don’t raise their own young, but lay their eggs in crows’ nests. Since crows rule in my garden, and chase away the smaller, pretty birds, I like the idea of a bird that can get the better of them. According to an interesting article in yesterday’s Hindu newspaper, the koels’ mating season has started early this year. 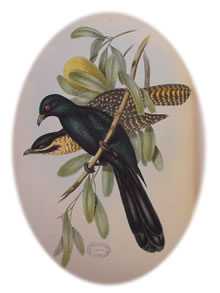 One year the gardener brought in a koel chick which had fallen or been pushed out of its foster-nest. We named it Kaalu, and put it in a cage in the kitchen. It was a bundle of fierce hunger, shaped like a round black feathered evening bag, with a hinged mouth and pink silk lining. If you approached it, it would shake its neck frantically, mouth gaping, squawking for food. You’d give it some cooked rice grains and it would try to swallow your finger too.
at 23.4.03
Labels: at_home
Newer Post Older Post Home