I came across this photograph yesterday (click for a larger view). The elderly man in the centre, wearing a white turban, is R's great-grandfather, Chatrabuj Gandhi. R is not sure about the rest, but one of the young men standing behind him must be R's grandfather Dwarkadas; Dwarkadas's oldest son, Mangaldas, R's father, is probably one of the small boys.

It doesn't matter if none of these people are actually in the photograph -- they could all be complete strangers. What I thought when I studied their faces was that these people, like us, were all starring in their own internal stories, even as they sat for the photographer; I imagine that they were all convinced that they were exceptional and significant in the universe. And of course, for all intents and purposes they have all vanished without leaving much of a trace: a faded photograph, some DNA, maybe a house one or two of them built, which still stands in the village.

I know all this, and yet part of me is still convinced most of the time that I'm the star of the play, and that I will never die.

(Actually, the very first thing I thought was about styles of headgear: the elders are wearing turbans; the younger generation, round caps. In more recent pictures of R's father and uncles, they are all wearing white caps shaped roughly like an upturned canoe; and the younger generations have abandoned headwear altogether. And -- oh yes -- where are the women? They didn't observe purdah, and the girl children are included. Were they standing to the side, observing the occasion, or preparing the after-photograph lunch? I bet they were all starring in their own stories nonetheless.)
at 30.4.07 3 comments:

I just discovered Poetry Thursday, which happens to be running a villanelle challenge. I tried to write a villanelle once, but gave it up; so this was my big chance.

See links to villanelles written by other participants in the comments on the Poetry Thursday link above.

Here's a good analysis of the villanelle form. And here are links to famous villanelles: Dylan Thomas's Do Not Go Gentle Into That Good Night, and Elizabeth Bishop's One Art. I love them both, but I especially like Bishop's fearless use of slant rhymes, and her play with the form, without destroying it.

Okay, and here's mine. I'm afraid it's less villanelle than doggerelle, but I did work hard on it, and I'm not too displeased with it. It's dedicated to my husband:

Take your little pills and go to sleep.
Let your darkness meet the darkness there.
I pray the night your frightened soul to keep.

Your fear's abode is oceans deep.
It's drowsing, tentacled, within its lair.
Take your little pills and go to sleep.

The path to quietude is steep
and long, sheep-counting, winding to nowhere.
I pray the night your frightened soul to keep.

The sandman scatters blessings in a sweep,
so leave behind your worry, your despair.
Take your little pills and go to sleep.

Be still now, no more need to weep:
Perhaps this time you'll stay forever where
I pray the night your frightened soul to keep.

So now I lay you down to sleep,
to dark and peace; no dream, no nighmare.
Take your little pills and go to sleep.
I pray the night your tired soul to keep. 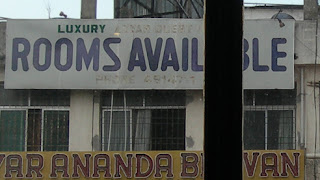 We discovered another coffee place today -- Coffee World on LB Road, next to the flyover, in Adyar. It is pleasant, but its gigantic windows look out on an ugly view.

I did have a chance to speculate on who the occupants of the luxury rooms might be; travelling salesmen of small items, perhaps, carrying samples in worn molded-plastic briefcases, perspiring in the summer heat. The small reception area would contain one man dozing or reading the newspaper under a dirty ceiling fan, and perhaps a small boy, ready to run errands or bring cold drinks - served in the bottle, with a straw. At the end of the day the guests would return from meetings, bathe from a bucket of cool water, change out of shirts and trousers into more relaxed lungi and undershirt, and lie down for a while, before deciding what to do with the evening.
at 19.4.07 2 comments:
Labels: Chennai 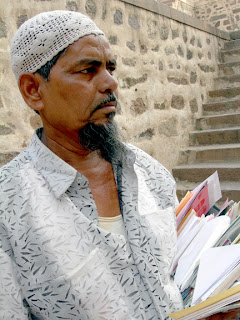 We recently came back from spending a week in Hyderabad. We hardly got out, but did manage to see Golconda Fort and the Qutb Shahi tombs. I had seen the fort many years ago, and had a vague image in my mind of a vast expanse of strewn boulders and cut stones -- but it wasn't like that; it's a ruined but still beautiful hill fort, one of many in India. Golconda was fabulously wealthy, in large part because it is said to have been the ancient world's only known source of diamonds (including the Kohinoor and the Hope diamonds). Here's the wikipedia entry on Golconda, which includes a list of other Indian forts.

As we walked out of the gateway this man approached me with his envelopes of postcards in the crook of his arm. I was holding my camera; I gestured with it and said, "See, I have my camera. I've taken so many pictures, I don't need any postcards." He replied very mildly, "But you may not have these angles; just take a look." By this time R and our friend had emerged. I asked R if he would take the man's photograph. R said, "She would like to take your picture, is that all right?" He said politely, "If Sahib will stand beside me." But he stood against a wall of the fort, and R composed it so beautifully, with the angles of the envelopes and the (modern) stairs. And we bought two sets of photographs, and parted cordially. 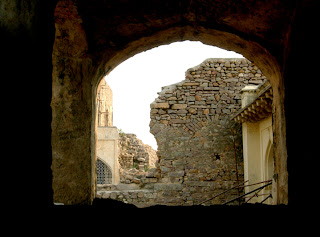 Here are some photographs which I took of Golconda, at Flickr.
at 18.4.07 2 comments:
Labels: photographs_others', travel

under the fire star was four years old yesterday. Appropriately, I missed it....

Just to mention a couple of other blogs I've encountered recently:

Parayil A. Tharakan Blog may not have the most catchy name, but it's worth looking at. It is full of stories and pictures from a Kerala which must largely exist only in memory.

I just came across this one today: India outside my window -- another expatriate, in the not-far-away Southern city of Bangalore.
at 18.4.07 2 comments: 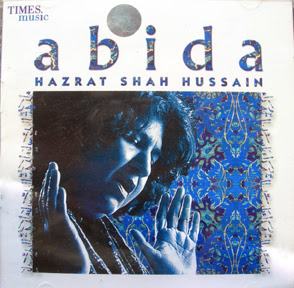 Abida Parveen, a Sufi singer from Pakistan, has a big, powerful voice. Because of this voice, and the passion with which she sings, and also because of her remarkable (big, powerful) physical presence, she has become instantly recognisable in India and Pakistan. Sometimes I find her overwhelming, as I did another singer in the same tradition, the late Nusrat Fateh Ali Khan. But recently a friend gave us a CD of Abida Parveen singing songs of Hazrat Shah Hussain, which are more melodious than some of the work in this genre. I quickly became hooked to one of them, Raanjhan. I've been listening to it every day, and every day it has the same mesmerizing effect on me.

I've uploaded it as an MP3 here. I'll keep it up for a week or so. It's a big file -- 10.9 MB -- so if you don't have a fast connection you can listen to a streaming version of it at musicindiaonline.com. If you like it, you can hear the rest of the CD at the same site here. Do listen to it, and tell me how you reacted to it.

I found an article in the Pakistani newspaper Jang about the annual festival at Shah Hussain's tomb in Lahore. It's vividly written, and includes information about Shah Hussain (1538-1599), who must have been quite a character.
at 14.4.07 2 comments:
Labels: music
Newer Posts Older Posts Home
Subscribe to: Posts (Atom)