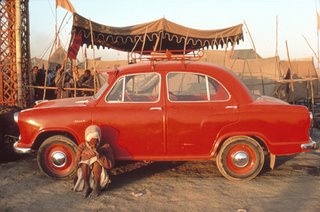 Raghubir Singh (1942-99) took as one of his last photographic subjects the Ambassador car. The Smithsonian’s Sackler Gallery is holding an exhibition of his Ambassaor photos. They have also been published in a book, The Way Into India.

Auto*Focus, one of Raghubir Singh's last great projects, combines the photographer's passions for color and the Indian landscape with his fascination with the Ambassador car, an icon of modern India. Diplomatic limousine, family car, and taxi, its distinctive silhouette is omnipresent across India. The Sackler's exhibition presents forty-eight photographs that place the car in the landscape or, conversely, frame, reflect, and refract the landscape through the Ambassador's windows and mirrors. The images convey the garish rhythms of the urban street or the harmonious palettes of desert and monsoon landscapes in juxtapositions of the ancient and the contemporary. Throughout the exhibition, the car serves as a metaphor for the photographer traveling through the landscape and as a meditation upon the nature of photographic representation.

CNN’s website includes an article about The Ambassador: India's car of authority and aggression

…. the original design, based on the British-built Morris Oxford of 1948, still stands out…. Apart from the region's taxi fleet, few customers are willing to buy it, a reality that threatens the existence of its makers Hindustan Motors (HM)… Even today HM's main product is still the 1950's vintage Ambassador albeit with a Japanese Isuzu motor, with sales of only 11,000 cars expected in the second half of the year ending March 2002 according to Reuters. Although it has only a few percent of the automobile market this relic from another era is an Indian legacy….

When I first came to Chennai – it was called Madras then – as a student, most cars were Ambassadors. Most cars were black. When I returned years later, there were snazzy-looking Maruti-Suzukis, and you almost never saw a black car. I would drive out in my little Maruti (‘son of the Wind God’) and feel annoyed when I got stuck behind an Ambassador. They hogged the road, you could never see around them. Now that there are more and more foreign cars on the road, and lots of vile SUVs, the Ambassador has become quaint, loveable.

There’s an article by Raghubir Singh, excerpted from his book Tamil Nadu (the state of which Chennai is the capital) here.
at 24.4.03
Newer Post Older Post Home