I had written a post, long back, about my first Tamil move: Pennin Perumai. There's a fun article in the Hindu, by Vijaysree Venkatraman, about revisiting the old black and white Tamil films from that era: What Old Movies Do.

I see that I should think of those old 'socials' with more respect. I still think Sivaji is a lot cuter than Gemini, though. 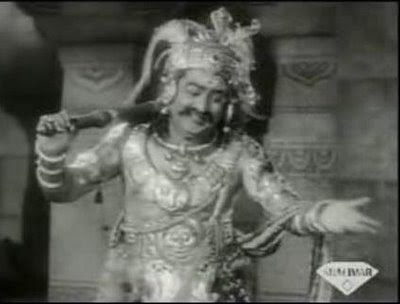 Update: Vijaysree Venkatraman kindly sent me this YouTube link: Vivaha Bhojanam ("wedding feast"), a song that I love, in which Ghatotkach, the son of one of the Mahabharata heroes, Bhima, and a demoness, eats an entire wedding feast by himself. I have been known to burst out with "Bhojanam Bhojanam, ha ha ha ha ha ha" on occasion, at the prospect of a feast. (This is the Telugu version, so it's vivaha bhojanambu. There's a Hindi version somewhere, as well). Do watch it, I don't think you can help laughing along with it.

Five years ago, our neighbourhood was so quiet that visitors invariably exclaimed that it was hard to believe it was in the heart of the city. The land across the street was a backwater, part of the Adyar River basin, bordered with thorny bushes, and home to mongoose, snakes, and many species of birds. Now it has become a giant construction site. Here is the view from my gate now -- the new studio of Sun TV, on seven acres of land. From the depth of its foundations, I assume that it will rise so high that the blue sky in the photograph will be completely covered. To the right and around the corner, still more huge buildings are rising -- two hotels, apartment buildings, IT parks: 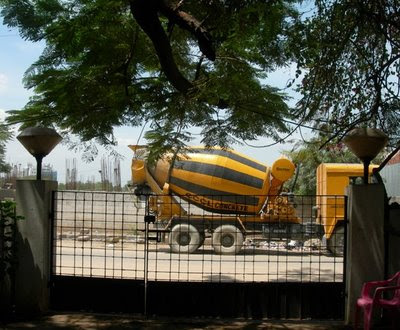 and looking to the left: 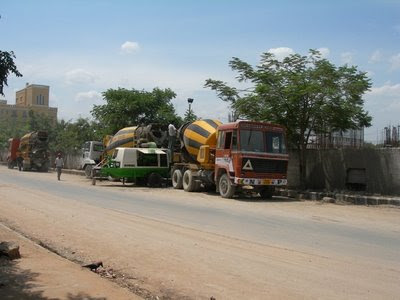 Here is what you will see if you stand at the gate looking in (the watchman provided that pink chair for himself. I'm not too fond of it, but it looks endearing, compared to the hulking monsters outside): 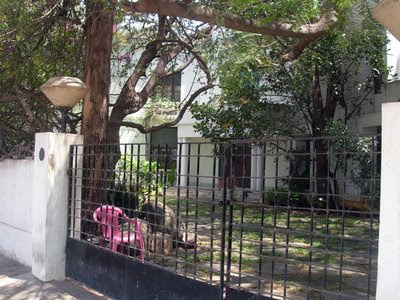 It's still peaceful to look at, but the roar of five cement mixers outside and the construction of a huge building, which goes on for 24 hours a day, is impossible to block out.
at 12.8.08 6 comments:

What a beautiful, simple love song this is -- Mora Saiyan Mo Se Bole Na (My beloved won't speak to me). I heard it somewhere, and tracked down this version, sung by Amanat Ali on the TV singing contest Sa Re Ga Ma Pa. I like it better than the original. The visuals are nothing, but what a beautiful voice he has, and how movingly he sings:

Someone living near us died recently in sad circumstances. As usual, I only found out about it from Mary, who came to me and said, "The watchman wants more light in the back garden. There's one place near the kitchen that's very dark and he's frightened." I pointed out that we have plenty of security lights, whereas our neighbours have none at all.

Then she told me about the ghost. It has not been seen, but it is assumed that there must be one, because the death was unusual. Mary's room is outside, and when she got up in the night she felt afraid. The watchman was afraid because one night he heard a sound in that dark corner, something like "HOO!" In fact, he hadn't come to work for the last two nights. I said that there were no ghosts, and added, unkindly, that if ghosts are afraid of light bulbs, the watchman could just shine his flashlight on the dark corner when he did his rounds. I said that if it did exist, it would surely go away again soon.

A couple of days later, Mary said that some neighbours had done puja to exorcise the ghost from their property. Since we were not so protected, it was more likely than ever to linger with us. Could we also hire a Hindu priest? He would drive the ghost into a gourd, and break it on the road -- as is done with evil spirits on Ayudha Puja. I wasn't sure -- R already grumbles about Ayudha Puja. But when I asked him, he said that he would authorise a certain amount of money to hire a priest, and if that would make everyone feel better, fine.

For a week or so I heard no more about it. One day I asked Mary, "What happened to that priest you wanted?" and she said vaguely, "Oh, it's so far to go, to find one." I thought the ghost scare was over. Then yesterday she told me, "I've found a (Christian) pastor. He will come and say prayers." I asked if that would satisfy the Hindu and Muslim watchmen; she said that it would.

Later: Well, the pastor didn't show. Mary was all a-flutter -- she said he was a thaalaivaar, the leader of so many churches. I guess he was too busy. We had to go out, and when I came back and looked in the kitchen I saw a tray kept ready, with a good china cup and a pot of tea, all untouched.

I feel sorry for her disappointment, but I'm sick of this ghost now. A month has passed since the death, and no one has been harmed, except for a little fever suffered by the brave nightwatchman. Let the spirit rest, I say, and be soothed in the dark corner of our peaceful garden, out behind the kitchen.
at 7.8.08 7 comments:
Newer Posts Older Posts Home
Subscribe to: Posts (Atom)