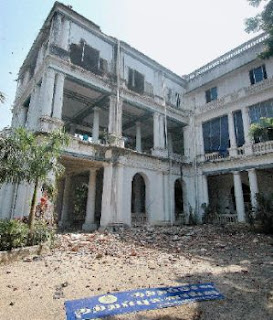 The Admiralty House, one of Chennai's few remaining fine old buildings, is being demolished. From The Hindu:

On Monday, workers were breaking the roof of the heritage building, commonly known as the Admiralty House, with giant hammers. The demolition will be completed in 40 days, according to an official of the Public Works Department, the custodian of the Estate properties. Some other buildings on the Estate will also be demolished, including the old MLAs’ quarters. The official says that as the buildings are vacated, they will be pulled down. The department hopes to complete the demolition of all the identified buildings by the end of next month.

The exercise is being carried out to facilitate the execution of the Rs. 200-crore Assembly complex project.

The government has selected a German-based architectural firm for the Assembly project. As per the present proposals, there will be two blocks – one housing the Assembly complex and offices of the Chief Minister and Ministers and the other accommodating offices of various government departments. While the first block will have ground and six floors, the second is likely to be a high-rise building, having a maximum of 20 floors. The government is planning to commence the construction of the proposed Assembly complex by September.

Till recently, the Government House building was occupied by the different wings of the Police department such as Crime Branch-Criminal Investigation Department (CB-CID) wing, the Economic Offences wing and Narcotics Intelligence Bureau-CID. The wings have been shifted to different places in the city. In the mid-1990s, the building, as a makeshift arrangement, even served as the headquarters of the Police department when the government undertook renovation of the DGP office building on the Marina, which is yet another heritage landmark. Till Independence, the Government House was the residence of Governors. For sometime, it also functioned as the MLAs’ hostel.

S. Muthiah, historian, wrote about the importance of the heritage monument on several occasions in The Hindu. In his column on October 29 last year, he wrote that after the French left the Fort St. George’s buildings in a shambles, Governor Thomas Saunders of the British East India Company in 1752 rented a house belonging to the wealthy Mrs. Antonia de Madeiros just across the Island from the Fort. On August 28, 1753 the Government of Madras bought the house for 3500 pagodas to serve as the Governor’s garden house. Only in 1947 did the Governor’s residence move to the present location in Guindy – Raj Bhavan.

Goodness gracious, it's my blog's birthday again. The fifth. Happy blogday to me.

Jillu Madrasi told me about this YouTube video, about a man who has invented a better way to climb a coconut tree. Wonderfully simple, effective technology:

April is National Poetry Month, and every year Knopf sends me a poem a day during April. (Though it's a bit late, they'll send you one too, if you send a blank email to: sub_knopfpoetry@info.randomhouse.com. They'll keep you on the list for next year, too.)

I received the most wonderful poem yesterday, by Dan Chiasson, from his book Natural History:

There is one mind in all of us, one soul,
who parches the soil in some nations

but in others hides perpetually behind a veil;
he spills light everywhere, here he spilled

some on my tie, but it dried before dinner ended.
He is in charge of darkness also, also

He makes the stars disappear, but he makes
small stars everywhere, on the hoods of cars,

in the compound eyes of skyscrapers or in the eyes
of sighing lovers bored with one another.

Onto the surface of the world he stamps
all plants and animals. They are not gods

but he made us worshippers of every
bramble toad, black chive, we find.

In Idaho there is a desert cricket that makes
a clocklike tick-tick when he flies, but he

is not a god. The only god is the sun,
our mind—master of all crickets and clocks.