Waiting for a Cyclone 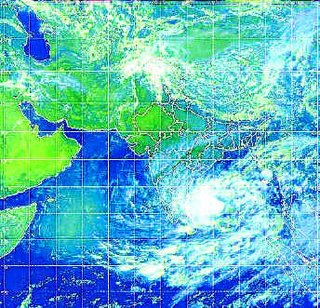 There’s a cyclonic storm in the Bay of Bengal, about 600 km east southeast of Chennai. It’s supposed to begin raining here on Wednesday afternoon. Imagine, hoping for a cyclone – we’re that hungry for rain. The temperature has come down a bit, at least.

I just read a good piece from Zellar: Open All Night: photo mart, about the pictures that people bring in for developing – (via Cassandra).

I have the habit of leaving film in my camera until I’ve forgotten what was on it. Once I took in a roll of film which had been in my camera for almost a year. I gave it for developing and returned in an hour. The man behind the counter handed me an envelope. I pulled out a photo at random and found myself staring at a close-up of the face of a corpse, with wads of cotton stuffed up its nose, and a white cloth tied around its head. I pulled out some more pictures, and saw an entire funeral ceremony – wailing people, the procession to the cremation ground. I was so confused that I wondered for a moment if I had taken these pictures and forgotten them. I said very hesitantly, “I don’t think this is my roll.”
at 13.5.03
Newer Post Older Post Home