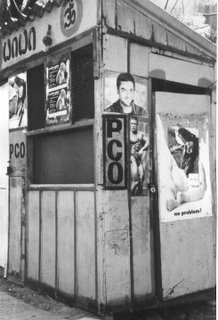 In another part of the city, we sit in the bar at the Adyar Park hotel. The audible voices are Australian and German – a Lufthansa air crew – but the place is almost empty, at 11:00 on Sunday night. The waiters, bored, drift over one by one to chat. There’s a display of expensive Cuban cigars on a round table in the middle of the bar. A waiter unlocks a drawer and brings out a cigar lighter like a miniature blowtorch to light R’s pipe. The chairs are comfortable, the lighting soft. We drink Kingfisher beer. I watch silent images of a local news channel from a television on the bar counter. Here’s Richard Armitage, the American Deputy Secretary of State. With his bald head and massive, boxy body, he looks like an old-style Soviet politician, only better tailored. He’s come to Delhi to pat India on the back for its latest peace initiative with Pakistan. (I feel hopeless, yet wish to be hopeful, about this initiative. Many Indians find Armitage’s peace-making avtaar ironic... to put it politely.) Now here’s the distinguished head of Javed Akhtar, screenwriter, songwriter, sometime poet. I wonder why he’s on the news. Last year a journalist from the Pakistani weekly The Friday Times was visiting India when Akhtar released a book of his Urdu poetry. She wrote snippily that he was a good songwriter, not a serious poet – but that Indians go crazy over anyone who can pronounce the letter ‘qaf.’ Which seemed pretty funny, and maybe true. Now it’s 1:00. Outside our small pool of light the place is being discreetly cleaned and ordered for tomorrow. Time to go.
at 12.5.03
Newer Post Older Post Home