There’s a profile of the great film director, Adoor Gopalakrishnan, in the May 5 Time magazine (Asia Edition): 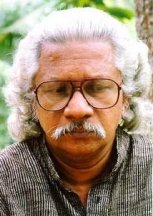 When he's shooting a film, Adoor Gopalakrishnan, 62, doesn't listen to his actors, critics or the government, nor does he pander to his audience. He does, however, listen to the wind. While shooting his latest film, Shadow Kill, the story of an anguished hangman in 1940s India, Adoor was struck by the thumping sound of nighttime gusts playing on the leaves of a palmyra tree near his set in a rural Kerala village. "It sounded exactly like a heartbeat," he says. It was the rhythm he hadn't been aware he was seeking—a steady drumming, and a reminder of nature's indifference to his characters' troubled passions. "I made the wind a character in my film," Adoor explains. That's perfect casting for an Adoor film: the wind here is gentle and understated—and it's highly unlikely to challenge the director's interpretation of its role. (more)

Two of his best films - The Walls (Mathilukal) (1990) and, even more remarkable, The Servile (Vidheyan) (1994), were made with Mammootty, one of the great stars of Malayalam cinema. 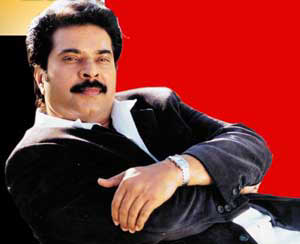 I saw Mammootty once. We were driving home from dinner on the Marina road around midnight. On the beach we saw the bright lights of a film shooting (it was NOT an art film -- pure masala).

A car was parked within a ring of lights. Mammootty sat in the driver's seat. Someone held a mirror while he combed his hair. Someone else leaned over the car window with a sheaf of papers, discussing the script. A man held a mike with an open book resting on top of it for protection. The director called "Action!" A man standing by the car's hood gave it a downward push, so that it would seem to have just come to a stop. Mammootty got out with an air of arrogance, stood by the car door with one foot crossed over the other, and said, "Good evening, Mr. Nair." "Cut!"

Mammootty got back in the car. People were gathered closely around it: one man crouched just behind with a spotlight for backlighting. Another spotlight with a blue cellophane filter shone on the car from a couple of feet in front. There were other, smaller lights on the sides. A small crowd of watchers lined both sides of the road. During the shooting they continued their conversations -- the soundtrack would be dubbed later.

"Action!" The car bounces, Mammootty gets out, stands, says "Good evening, Mr. Nair." "Cut, cut, cut!" He sits in the car. He is wearing a long beige kurta, light trousers, and white patent leather sandals. Ramesh said, "They'll have to keep shooting until they get those shoes in focus. Look at them!”

Finally Mammootty says "Good evening, Mr. Nair" in just the right way. Someone brings a clap-board to within a foot of his face. CLACK!!!
at 2.5.03
Labels: movies
Newer Post Older Post Home